“We deeply appreciate Governor Kay Ivey’s $50 million commitment to the Altec/Styslinger Genomic Medicine and Data Sciences Building at UAB,” Chancellor Finis St. John said today in response to Governor Ivey’s announcement of a $50 million commitment to the project. “This transformational research facility will have a life-changing impact on the citizens of Alabama for generations to come while improving health care delivery around the world.” 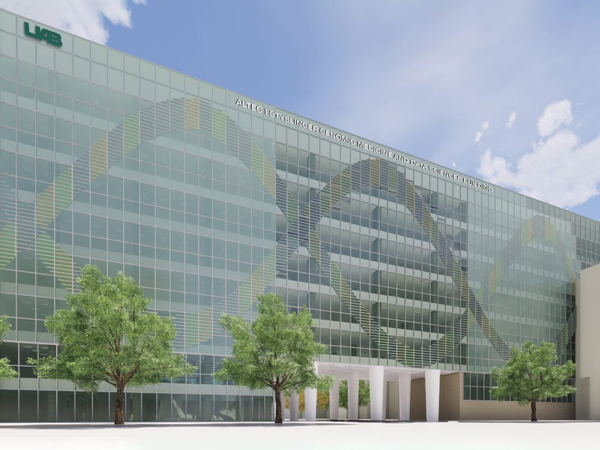 According to Chancellor St. John, the goal of securing funds for the Genomic Medicine Center has been the University of Alabama System Board of Trustees’ number one priority since the project’s inception. UA System leadership has been integrally involved in building a strong coalition of public and private partners to bring the research center forward.

“In addition to the Governor’s foresight and dedication to this project, today’s announcement would not have been possible without the support of Birmingham Mayor Randall Woodfin, the Birmingham City Council, the Jefferson County Commission, the Jefferson County Legislative Delegation and a generous gift from the Altec/Styslinger Foundation,” Chancellor St. John emphasized.

As a global leader in precision medicine and genomics science, the University of Alabama at Birmingham will be home to the new center. UAB President Ray L. Watts reiterated the impact of bringing the precision medicine facility to life. “Recognizing this rare opportunity for our state, Chancellor St. John, the University of Alabama System and the Board of Trustees made this transformational project their top priority,” Watts said.

“We share a great appreciation for Governor Ivey’s affirmation and visionary leadership that will allow UAB and Alabama to be a leader in the future of precision medicine.”

Watts said Governor Ivey’s support is an investment in every Alabama citizen. “This facility will accelerate advancements in precision medicine, informatics and data sciences as we gain greater understanding of the role our genes and the environment play in major human diseases.”

Dr. Selwyn Vickers, Senior Vice President of Medicine and Dean of the School of Medicine at UAB, estimates the building will bring in more than 50 additional leading researchers and 300 research support staff, generating an increase of $75-80 million in research funding.

Dr. Selwyn Vickers, Senior Vice President of Medicine and Dean of the School of Medicine at UAB, estimates the building will bring in more than 50 additional leading researchers and 300 research support staff, generating an increase of $75-80 million in research funding.

“This facility will be pivotal to recruiting and retaining high-level researchers,” Vickers said. “We are already on the leading edge, but this facility will increase our competitive advantage in supporting researchers who will bolster our local economy.”