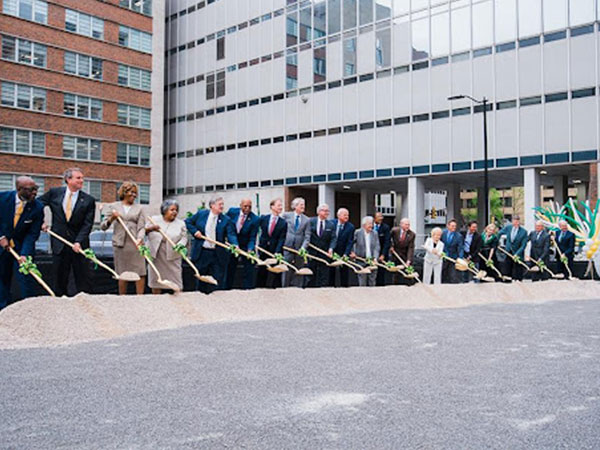 The ceremony, which included senior leaders from UAB, UAB Medicine, the Heersink School of Medicine, the Board of Trustees of the University of Alabama System, key donors, and representatives of state and local governments, including Gov. Kay Ivey, was held on the site of the new facility, at Seventh Avenue South, between 19th and 20th streets, in Birmingham.

“This facility, made possible by the foresight and help of our state and local leaders, as well as generous donors, will position UAB and Alabama to be a global leader in precision medicine and genomic sciences, enhancing world-class clinical care for our community and beyond,” said UAB President Ray Watts, M.D. “Advancements in precision medicine, informatics and data sciences will now be accelerated, and we will gain greater understanding of the roles our genes and the environment play in major human diseases. These discoveries will lead to the development of new lifesaving treatments.”

The 175,000-square-foot building will be iconic in its architecture, which features a visible-to-all double-helix design. Most importantly, it will be profound in its impact locally, statewide and globally.

The building will bring together researchers, equipment and staff for the Hugh Kaul Precision Medicine Institute, the Informatics Institute, the Bill L. Harbert Institute for Innovation and Entrepreneurship, and translational scientists from many different disciplines to increase national and global competitiveness of both UAB and the state of Alabama in research, innovation, commercialization and economic development.

The project is being funded through $50 million from the state of Alabama via the Public School and College Authority — the largest-ever investment from the state in a university facility. An additional $5 million from Jefferson County also supports the project, as do funds supplied by UAB donors Altec/Styslinger Foundation and Marnix and Mary Heersink. Birmingham Mayor Randall Woodfin has expressed interest in working with other city leaders to support the project as well.

It is a facility that represents the power of public/private partnership among UAB, the UA System Office, individual and corporate donors, the local business community, and elected leaders in an effort to drive better health and prosperity for the people of Birmingham, Jefferson County, Alabama and beyond.

“This is a signature investment for the state of Alabama and a bold project that will have a real impact on our economy and the long-term health of our citizens far beyond the dollars given,” said Gov. Ivey. “It will stimulate major strides in science and medicine and serve as a wise investment with a great return that serves all Alabamians.”

UAB will recruit upward of 75 additional investigators and some 350 new support staff over the next five-plus years to work alongside the talented and renowned team of researchers already in place. The leading-edge research they conduct in the facility will attract an estimated $100 million in additional research funding annually.

“The University of Alabama System and the Board of Trustees are grateful for the visionary leadership of our elected officials and the generosity of our donors, who all recognized this project will truly change lives,” said Finis St. John, chancellor of the University of Alabama System. “This facility represents the future of modern health care and positions UAB to be the leader in genomics and personalized medicine. This transformational initiative was our top priority, and it is now becoming a reality thanks to the Altec/Styslinger Foundation, Dr. Marnix E. and Mary Heersink, Governor Ivey, state Senators Jabo Waggoner, Rodger Smitherman and Greg Reed, Commissioner Stephens, Mayor Woodfin, and other dedicated leaders in Birmingham, Jefferson County and the state.”

UAB’s efforts in research and development — from basic research to commercialization, drug discovery and the formation of startup companies — will also dramatically increase, says Selwyn Vickers, M.D., dean of the Heersink School of Medicine and CEO of the UAB Health System. Vickers says recruitment and retention efforts made possible by the project will attract dozens of “startups” to Birmingham and Alabama, each pursuing potentially groundbreaking ideas and treatments.

“When an investigator gets a federal grant, many of which are more than $1 million, their lab is like a startup company with employees often making more than $50,000 annually,” Vickers said. “This building will house dozens of these ‘small companies’ that would not be in Alabama if it weren’t for UAB and its research engine. It is a constellation of companies providing jobs at a high level and attracting new talent that will increase our competitive advantage in supporting researchers who will in turn bolster our economy and aid in the care of all Alabamians.”

Watts adds that UAB, working together with Southern Research and other partners, will make Birmingham the biotech commercialization leader in the Southeastern United States and a national and global nexus for innovation and entrepreneurship.

“The main driver of this gift is the transformational impact that genomics will have in medicine,” Styslinger said. “As a foundation, we wanted to be supportive of breakthroughs in genomic sciences, and of a facility that will have a tremendous impact not only on UAB but on the state of Alabama and beyond.”

Collaboration among government entities was instrumental in bringing the project to fruition.

“The city of Birmingham believes in UAB and appreciates its commitment to our residents through the education and jobs it offers and the care it provides,” said Birmingham Mayor Randall Woodfin. “This investment will enable our city to attract more world-class talent, create more high-tech jobs, and help continue our upward trajectory as a destination for the best and brightest in Alabama and beyond.”

The new facility will involve renovation of the existing Lyons-Harrison Research Building, located at 701 19th St. South on the UAB campus. Two buildings — the Kracke Building and the Pittman Center for Advanced Medical Studies — have already been removed to make way for the project, which will include the Marnix E. Heersink Institute for Biomedical Innovation Conference Center. The Heersinks recently provided a transformational $95 million gift to name the Heersink School of Medicine, and a portion of that gift will fund the conference center.

The Altec/Styslinger building will include space for computational research, research support, offices, administrative and scientific collaboration, and meeting spaces designed to meet the specific needs of genomics and precision medicine investigators and their programs.

Initial initiatives will include cancer research, neuroscience research, rehabilitation medicine and pediatric research, as well as research into the ongoing COVID-19 pandemic. In addition, the new collaborations will include clinicians serving on the front lines of patient care and enhance translational health initiatives already active at UAB. Total project costs are expected to exceed $78 million. Construction is expected to be completed in spring 2024. This news story was originally published by UAB News.

This story was originally published by UAB News.