In June 2020, the University of Alabama System Board of Trustees convened a diverse working group to conduct an in-depth review of named buildings, structures and spaces on UA System campuses relative to its fundamental Shared Values, including diversity, inclusion and respect. 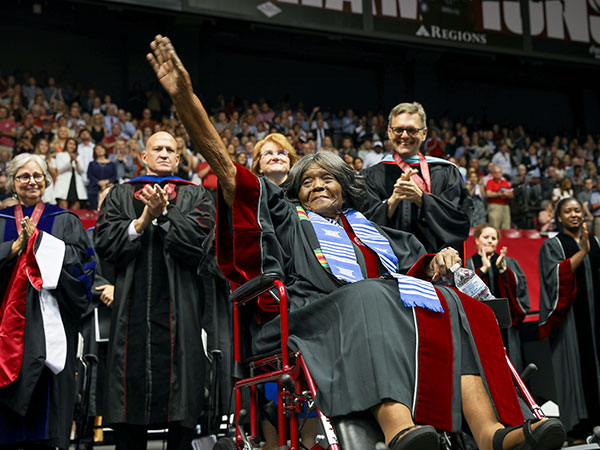 At the recommendation of the Working Group, on February 3, 2022, the Board of Trustees voted to amend the name of Graves Hall on the University of Alabama’s campus to Lucy-Graves Hall in honor of Dr. Autherine Lucy Foster’s leadership and to recognize her life as a dedicated educator. The Working Group submitted this naming recommendation after serious consideration and much deliberation, which included seeking advice from more than a dozen scholars specializing in Alabama history and consulting with many stakeholders. The family was kept informed throughout the naming process.

The Board’s priority is to honor Dr. Foster, who, as the first African American student to attend the University of Alabama, opened the door for students of all races to achieve their dreams at the University. Unfortunately, the complex legacy of Governor Graves distracted from that important priority.

“The Working Group, in making this recommendation, certainly intended for that paired name to generate educational moments and help us learn from our complex and rich history,” said Judge John England, Jr., chair of the Working Group. “Somehow or another, the honoring of Autherine Lucy Foster took the background – that’s not what we wanted.”

At a special-called meeting on February 11, 2022, the University of Alabama System Board of Trustees unanimously passed a resolution changing the name of Lucy-Graves Hall to Autherine Lucy Hall in honor of Dr. Autherine Lucy Foster.

Dr. Foster went by her maiden name at the time of her initial enrollment, and therefore preferred that the building be named Autherine Lucy Hall.

“As I’ve learned from talking with members of the working group, we unanimously recommend that name and we recognize it’s never too late to make the right decision,” Trustee Emeritus England shared. “My priority is that we move forward, and we honor someone who means a lot to me, and I’m sure to a lot of you, and that is Dr. Autherine Lucy Foster by placing her name – standing alone – on the education building.”

The Board of Trustees is grateful for the input received from faculty, staff, students, alumni and friends.

The recording of the livestreamed meeting includes additional information and remarks.